“I wouldn’t be too afraid of the commonly-made mistakes, as they are quite similar in every country and they can be easily addressed”

On the 13 and 14 September, a Horizon 2020 Widening Programme Info Day & Workshop took place in Yerevan, Armenia. On this occasion, we had the chance to have a discussion with two of the Speakers after the event: Mr. Wojciech Adamiak, National Contact Point (NCP) from Poland, and Mr. Pierantonios Papazoglou, Scientific Coordinator at The Cyprus Institute.

The event was organized by the National Academy of Sciences of Armenia (NAS RA), in cooperation with the “NCP_WIDE.Net” project of the NCPs for H2020-WIDESPREAD, and was aimed at improving the participation of Armenian researchers in the H2020 Widening Programme. But before going any further, let us first recap what is the ‘Horizon 2020 Widening Programme’ exactly?

On the website of the European Commission, we read that the Horizon 2020 Widening Programme was created after the interim evaluation of FP7 (predecessor of Horizon 2020), which highlighted that some Member States, particularly those that joined the EU after 2004, had low participation rates in FP7 projects. Therefore, Widening actions “address the causes of low participation by fully exploiting the potential of Europe's talent pool”. Mr. Wojciech Adamiak, National Contact Point (NCP) from Poland held three different presentations on the topic during the Info Day in Yerevan. The enthusiastic researcher with a background in physical chemistry explains: “If my kid would ask me what is widening, I would say that it is about making sure that wherever I go, the Research field is at the same level among the different countries. I would add that the Widening Programme is acting against this difference of level that might exist and against the ‘brain drain’ phenomenon. So it does not matter if you want to study in Poland, Germany, France or Italy, you should be able to find same level options available”.

“If my kid would ask me what is widening, I would say that it is about making sure that wherever I go, the Research field is at the same level among the different countries”

The Info Day & workshop in Yerevan gathered around 60 participants, including the representative of the EU Delegation to Armenia, the Deputy Chairman of State Committee of Science of Armenia, experts and of course, the Armenian scientific community. 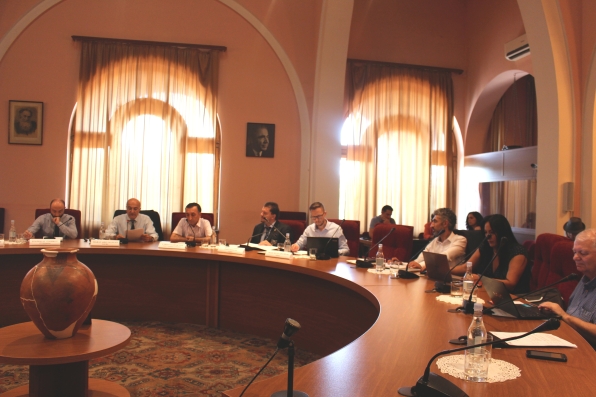 Attendants and Speakers during the Info Day & Workshop in Yerevan.

Mr. Pierantonios Papazoglou, Scientific Coordinator at the Cyprus Institute, held a session on the “Experience of The Cyprus Institute in 'Twinning' and 'ERA Chairs' Calls“, during the first day, and presented the entire “Twinning and ERA Chairs Proposal Writing Workshop” on the second day. He explains: “Armenia is a freshly nominated Horizon 2020 Associated Country and therefore, I adapted my training to this ‘newcomer situation’ by trying to induce motivation and inspiration. I also insisted on the fact that practical assistance is available and can be easily provided at any time by the very competent Armenian NCPs which were present”.

“Armenia is a freshly nominated Horizon 2020 Associated Country and therefore, I adapted my training to this ‘newcomer situation’ by trying to induce motivation and inspiration”

With over 10 years of experience in the field, first as an NCP for Cyprus for eight years and then as a Scientific Coordinator in the Energy, Environment & Water Research Centre of The Cyprus Institute, Mr. Papazoglou is also a certified vocational trainer for adults, who enjoys communicating and transmitting the knowledge he accumulated over the years, in the most pedagogical way. “During my presentations, I decided to first go through some contextualisation with the audience. It is really important to understand the whole system. Some people have a lot of experience but are not necessarily used to the EU terminology and philosophy”. Mr. Papazoglou started his presentation by describing the general landscape of Horizon 2020 and then narrowed it down to the Widening Programme and finally to the three schemes. Afterwards, he addressed some necessary technicalities such as the Participants’ Portal, how to identify calls, policy documents, etc. Finally, he interactively engaged the audience in practical exercises, showcasing real 'hints & tips' for proposal writing.

All in all, nine very in-depth presentations were made during the workshop, covering the three schemes of the H2020 Widening Programme: the so-called ‘Twinning’, ‘Teaming’ and ‘ERA Chairs’ actions. ‘Teaming’ is the action that consists of supporting the creation of new ‘centres of excellence’ based on partnerships with internationally advanced and leading institutions. ‘Twinning’ focuses on knowledge transfer and exchange of best practices between research institutions. Finally ‘ERA Chairs’ targets to bring exceptional researchers to universities and other research institutions. According to Mr. Adamiak, ‘Twinning’, ‘Teaming’ and ‘ERA Chairs’ calls are three elements that should be combined together and should constitute a long-term strategy for the institution applying. “An institution could, for example, start with a ‘Twinning’ action to learn a lot and develop its network, then it could follow with applying for the ‘ERA Chairs’ call and this way, bring excellent scientists to Armenia. And finally, once the institution has connections, a good network and great scientists, it could think of setting up the centre of excellence through the ‘Teaming’ action. The three schemes should be approached as a whole”.

“‘Twinning’, ‘Teaming’ and ‘ERA Chairs’ calls are three elements that should be combined together and should constitute a long term strategy for the institution applying”

Mr. Papazoglou also highlights the strategic aspect of the Programme. According to him, the Widening Programme is a tool dedicated to support the applying institutions to bring strategic and structural changes within their operational approach rather than a ‘hard research’ programme per se. He insists that in order to develop such strategy, it is important for applicants to: 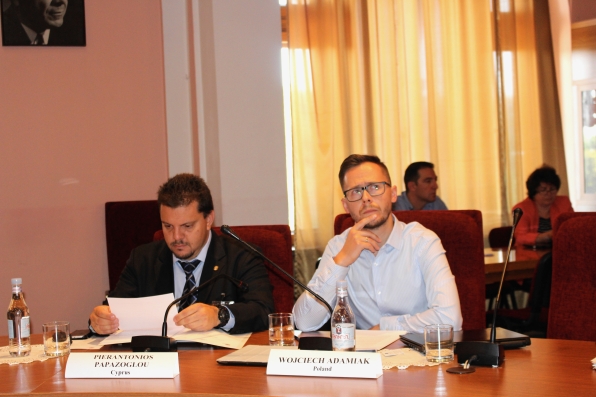 Participants of the event had the chance to engage in various interactive exercises, where they were placed in the position of proposal evaluators. They were able to proceed to in-depth analysis of real proposal evaluations and examined the various weaknesses and strengths, so as to deduce what could be improved in their own future proposals. Interestingly enough, examples from Poland brought by Mr. Adamiak, were quite similar to the ones brought from Cyprus by Mr. Papazoglou and the examples from Armenia. “It does not matter where the proposals come from, individuals tend to make the same mistakes everywhere. For example when I was listening to the Armenian NCP’s presentation, I thought, ‘Hey, they also make mistakes with IPR (Intellectual Property Rights) or with properly making the distinction between dissemination and communication in activities”, explains Mr. Adamiak.

“I wouldn’t be too afraid of the commonly-made mistakes as they are quite similar in every country and they can easily be addressed”, adds Mr. Papazoglou before suggesting some general tips to any organization interested in applying for the Widening Programme:

He then concludes: “As a final comment I just want to underline that I got the impression that Armenians are really well educated and some are also really experienced in the field of Science and Technology. I also sensed that they are quite eager to dive more deeply into European opportunities. It would make sense to keep accompanying them on this path with practical tools and trainings to help them taking the next steps. In that sense, I think the Widening Programme is a very good vehicle”.

It goes without saying that the event was a success and participants seem to have enjoyed it very much and provided highly positive feedback.